A Path from Command and Control to Agility

Have you ever noticed a team where little engagement, a lack of ownership, and team decisions are scarce?  One reason could be the amount of command-and-control from management that is occurring.  Often times this is one of those unspoken elephants in the middle of the room.   Command-and-control bosses and leaders are a sure way to kill the feeling of ownership, engagement, and empowerment in team members. 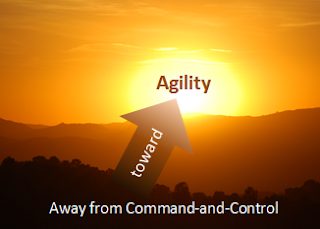 Agile comes along and promotes self-organizing teams, transparency, and team decision-making.  It also helps companies bring more value to customers and adapt to the market conditions, ultimately leading to making more money.  Within an Agile culture, it no longer requires a manager to tell a team what to do.  The number of organizations following Agile continues to increase. They realize that they no longer need directive managers but leaders who act more as coach and mentor, then the traditional boss.  So what is a command-and-control manager to do?
So I will leave you with this question.  Which approach will lead to more productive and high-performing teams?   Is it a culture where managers tell employees what to do or is it a culture where employees are self-organizing, feel ownership of the work, and are able to use much more brain power?   If managers exhibit command-and-control tendencies, it is in their best interest in the long run to adapt toward and Agile mindset and allow for self-organizing teams.  Since Agile is pervasive in many companies, it is an opportunity to adapt and help the organization toward better business results.
Posted by Mario Moreira at 8:28 PM