Lead the Change you want to see in the World

At the World Agility Forum in Lisbon Portugal on September 29, a panel of leading Agilists focused on “Shifting perspectives to know what is Real (agile)” The panel was made up of Chet Hendrickson, Steve Denning, Nigel Thurlow, and I.  We discussed “What is fake Agile? What is real Agile?” 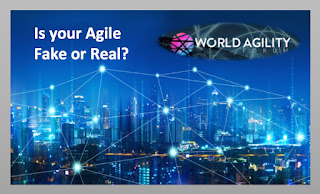 What is real Agile?  It starts with an alignment to the Agile Values and Principles.  Without understanding and embracing the values and principles, whatever a company is doing is certainly something but can it really be considered real agile?
Agile is more than mechanically applying Agile processes. This I refer to as “doing Agile”. More important than the selection of a particular process of Agile, is the art of learning how to live Agile values and principles, to transform Agile mechanics into Agile mindset. This is what I call “being Agile.”
Steve shared that fake Agile is really a reference to “Agile in name only”.  Since many companies want the badge, he indicated that to understand if companies are Agile, you need to look beyond what they are saying and look at what they are doing.
Nigel discussed how companies feel the need to get on the Agile bandwagon and do Agile as it is the trend.  He stressed the importance of understanding the benefits that Agile can bring and focusing on this instead of Agile itself.
Chet shared that there may be something much worse than fake Agile and that is “dark Agile”.  This is using Agile as pressure to get more work done or impose Agile on a team and not remove any of the constraints leading to numerous anti-patterns.
I (Mario) talked about a concept akin to fake Agile which I call “FrAgile”. This is when Agile is so minutely applied with little focus on the Agile Values and Principles that it quickly becomes brittle, lacks vigor, and shatters once there is tension applied, leading to a regression to old ways of working.
It was a healthy and collaborative discussion leading to a clear awareness of how fake Agile is damaging the good name of Agile.  Instead, it is time to bring pointed awareness of what is and isn’t agile and advocate for “being Agile” and the outcomes it can bring.