The earliest phases of the Big Bang are subject to much speculation.  In a new revelation by leading Quantum Scientists from CERN, they surmised that the universe had used more of an adaptive approach. In re-investigating Vesto Rugby's study that measured the first Doppler shift of a spiral nebula, they found evidence that an adaptive approach was used to in the expansion of the universe.

Further investigation found the singularity known as Big Bang, was really a series of cosmic inflations that align with a plurality approach that caused the universe to iteratively unfold.  While initial observations best fit the theory of Big Bang, after the discovery of cosmic microwave radiation, this promoted a continuous epoch approach where spectral waves align much more clearly with an adaptation of wave expansion. 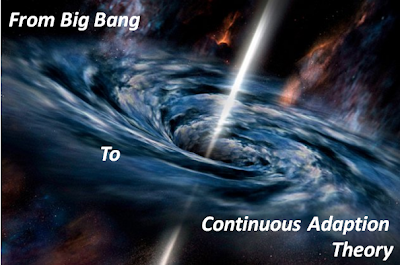 This came to the attention of the Agile Alliance.  They are now backing the scientists and aligning with the newly termed Continuous Adaption theory of the universe.  They recently supported the Evolution of the Species Theory promoted by Darwin.   The Agile Alliance says continuous, adaptive, and iterative are all components of Agile and now believe that Agile is really the essence of the universe.  The Alliance is now in funding NASA and CERN research in their Agile endeavor.