What Color is receptive to Agile?

In Frederic Laloux’ book “Reinventing Organizations”, he describes organization paradigms as an evolution in human consciousness.  Examining these paradigms can provide insight into organization attributes that lend themselves to an Agile culture.  The early paradigm starts with the Reactive-Infrared paradigm and then Magic-Magenta paradigm.  Both of these embody the early stages of humankind which include smaller groups such as tribes of people.  This is followed by the Impulsive-Red paradigm which has the guiding metaphor of a wolf pack illustrated by tribal militia, mafia, and street gangs.

The Conformist-Amber has the guiding metaphor of an army illustrated by a church hierarchy, military, and most government agencies.   Next is the Achievement-Orange which has the guiding metaphor of the machine illustrated by multinational companies and charter schools.  A majority of the organizations today tend to reflect a red, amber, or orange paradigm. 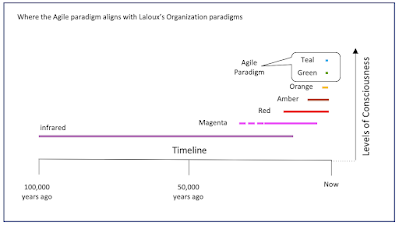 From an Agile perspective, it is after this where it becomes interesting.  A general alignment can be made to two of the latter paradigms that may be considered as behaviors you would hope to see in an Agile enterprise. These are the Pluralistic-Green and the Evolutionary-Teal paradigms.
The Pluralistic-Green organization strives to bring equality where all viewpoints are treated equality irrespective of position and power.  It uses the family as the guiding metaphor where we are in it together and help each other out. One of the breakthroughs of a green organization is Empowerment. Empowerment is focused on pushing a majority of decisions down to the frontline (e.g., where the work is).  This is directly aligned with Agile thinking where there is a focus on pushing down decision-making to the lowest possible level where the most information resides regarding the topic.
Another breakthrough of a green organization is that it is a values-driven culture. This very much aligns with the importance of leading with Agile values and principles. The green organization understands that a shared culture where leaders play by shared values is the glue that keeps those in organizations feeling appreciated and empowered that can lead to extraordinary employee motivation.
The Evolutionary-Teal paradigm emphasizes that the organization adapts as circumstances change. Its metaphor is one where the organization is a separate living organism. In a teal paradigm, titles and positions are replaced with roles, where one worker can fill multiple roles. This is very much like the concept of the cross-functional team within an Agile structure.  This paradigm emphasizes the capability to self-organize around the organizational purpose.  The hierarchical structures are replaced with self-organization focusing on the smaller teams. This is aligned with the Agile principle of self-organizing teams (aka, the best architectures, requirements, and designs emerge from self-organizing teams).
To read more about how the colors of Pluralistic-Green and Evolutionary-Teal can benefit an Agile journey, consider reading The Agile Enterprise: The Agile Enterprise: Building and Running Agile Organizations. You can also learn more about colors of organizations by reading Reinventing Organizations.
Posted by Mario Moreira at 6:27 PM