During one of my engagements, I was introduced to a fascinating model called The Way We Can by Jody Gold and Amina Knowlan. During the education they were delivering that was focused on giving and receiving feedback, I realized that the thing between two people, a.k.a., relationship, is a first class entity.  In other words, it is a real thing that must be built and nurtured.  In a programming world, a first-class entity is a data type you can freely assign to variables such as Scalars, Arrays, and Hashes to help build out the language. 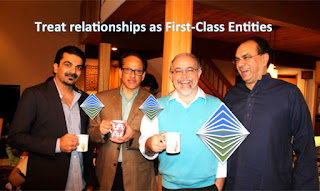 In an Agile world, to fulfill our goal to get our best ideas to customers faster, we have to learn faster and implement better together.  Most organizations experience meaningful gains during their first two or three years of agile implementation.   The early and iterative feedback achieved by delivering value to customers faster lets us build feature sets and user interfaces that align with current needs, instead of adhering to imperfect plans made long ago.  But after we’ve followed the agile model for a while, we run into the same people-problems that bedevil collective understanding, intelligence, and action everywhere.  Eventually, there are fewer process problems, and more relationship problems.

------------
We hope you enjoyed Part 1 of the Relationship series. Consider reading Part 2 and 3:
- (Part 2) Strengthening the Relational Infrastructure to Build High-Performing Teams
- (Part 3) Woven Together - A Practice to build Authentic Connection and Psychological Safety
------------

Posted by Mario Moreira at 8:27 PM