There is no Success or Fail, only Learn

I have been in discussions both in-person and on twitter with colleagues on whether we should use the word “fail” or “learn”.  This was in context to projects (aka, releases, increments).  Did they failed or did we instead learn.  I also realized that the term “fail” is somewhat subjective (e.g., did the whole project fail or just parts of it?).  The overwhelming agreement was that “what did we learn” was a better way to discuss the findings or results. This lends itself to a shift in mindset, to a continuous learning environment that recognizes that there is value even in the negative feedback.   We can learn from that feedback and adapt for better results in the future. 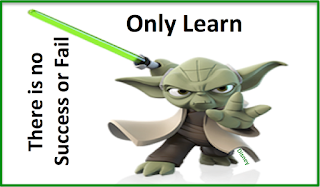 Then it occurred to me, the term “success” was also a bit subjective.  I recall reading a Standish Group Study where those projects that were “deemed” successful, 45% of the features were never used.  Another 19% was rarely used.  This meant that projects deemed successful built 64% never or rarely used features.  That seems to be a very loose definition of what “success” looks like.  In addition, how many projects are deemed successful because it met the scheduled deliver date yet few customers upgraded to it or bought it?  Is there a benefit to use the term “learn” in place of success?

While it may sound feel like the terms success or fail are the way to traditionally judge a project, release, product, or service, we lose sight of the most important result of the work, the feedback and what we learned from that feedback.   This learning helps us adapt to achieve better results.  If you are working in an Agile context where there are short increments of work, there is the benefit of continuous learning where you can continuously adapt for better business results.

I would suggest in the modern lexicon of work, when a project, release, or increment of work is done, it is much more important to ask what was learned instead of classifying it as a success or failure.  This strengthens the mindset within the organization that there is a value in feedback and the most important thing is what did we learn.  It also emphasizes a discovery mindset where what we think a customer wants is really a hypothesis that must be explored.  It is in the learning that can help us lead to better business results in the future.  So next time people talk about a project as a success or failure, instead turn the discussion around and ask “What did we learn”?
Posted by Mario Moreira at 10:15 PM