I occasionally hear that Agile is the silver bullet and will solve all engineering problems. In some cases, someone in management heard about Agile and figured it could be a quick fix to solve the challenges within their organization. Unfortunately this is far from the truth. While Agile mindset and methods can help you adapt to customer needs and deliver more effective customer value, one key benefit that I find is that Agile shines a very bright spotlight on the many problems of an organization or product team. 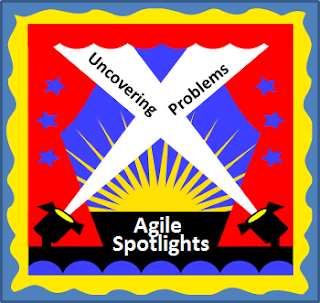 This is where Agile methods such as Scrum, eXtreme Programming (XP), Kanban, Test Driven Development (TDD), and others can be thought of as very effective problem-finding tools. While this is not what most people think about when adopting Agile, it is one of the side benefits. It is important to understand that Agile methods won’t necessarily help you solve the problems that are being uncovered but they really need to be removed to achieve the value delivery and speed you are looking for. More often these challenges have been around for quite some time, well before Agile was introduced. In fact, management and team members have known about these issues, risks, and dependencies, but they conveniently get buried under the organizational carpet. In the Agile world, every impediment can impact the value and velocity of Agile.  Once Agile comes along, the spotlight focuses brightly on anything that gets in the way of efficient and effective delivery of customer value.

What are some of areas where Agile shines the halogens onto existing problems? In my experience, I have encountered numerous challenges during the deployment Agile. Here are some examples:
For some teams that move to Agile, they can get overwhelmed by the problems that are identified by the Agile spotlight. In some cases, prior to deploying Agile, it is worth identifying the existing challenges so folks realize they are not caused by Agile. One way to do this is to understand your full end-to-end idea to release delivery process. The key is to add the challenges to your issues list, prioritize them, then address them in priority order. Remember, the Agile spotlight can help you identify some of your problematic areas on the product or in the organization. Take advantage of this but be prepared to address the challenges.  What existing problematic areas have you identified when you were implementing Agile?
Posted by Mario Moreira at 7:59 PM