Once upon a time there was a chicken and pig walking down the country road. The chicken turns to the pig and says, “I have a great idea! Let’s start a breakfast restaurant called Ham-n-Eggs”. The pig thinks for a moment, and then says, “No thank you. You would just contribute (your eggs) and could leave when you wanted to, while my bacon would be on the line”.

This humorous yet telling analogy from the Agile world helps us distinguish those that are just involved from those that are truly committed on an Agile team. However, in the real world, pigs do have to work with chickens and even other animals around the farm. Let’s take a look at each animal more closely. I have seen or heard about the Pig, Chicken, Fox, and Seagull before and I will also introduce a few more new animals (e.g., Rat, Cat, and Bull) to this interesting analogy. How many of these have you seen in your Agile workplace?


Pig - They are fully dedicated to the project. This would include the Agile team (aka, Scrum Team), ScrumMaster, and Product Owner. They are committed to the work. They work in a pig-pen with other pigs who love their work and environment and love to pitch-in. If Agile is being implemented correctly, they are more than willing to put their bacon-on-the-line every day because they feel ownership of the work. They are assertive and accountable for the success of the project and have a majority (if not all) of their performance goals linked directly to the success of the project and their specific Agile team.


Chickens – They come and go on the project. While chickens are mostly helpful, because they are contributing their eggs, they don’t always understand the full context because they are not a dedicated team member. So occasionally they may accidently contribute a rotten egg. They are not accountable for the success of the project, although they may have a small portion of their performance goals linked to the success of the project. 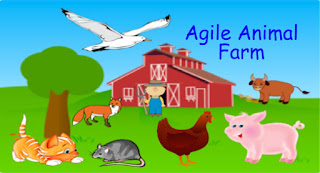 Fox – They like to stealthily move into and through the team seeing who has certain skills and ideas. Then they like to steal not only resources (Agile team members) for their own teams, but they also steal ideas. They are not necessarily negative, because they are often so quiet in their manipulative work. They are dedicated to their own success.


Seagulls - They like to fly around the project and not really contribute in any manner. They enjoy “talking” (mostly hearing themselves speak) and pretend they are adding value, but they are only annoying the pigs (Agile team members). Often, they like to swoop in so it can look like they are involved (and they’ll tell others this). They are often quite negative, squawk a lot in a “know it all” manner, and often poop on people and their ideas.


Rat –They are deceiver types who will use the trust of the team to gain insight into topics so they can then “rat” on what is going on to others. Often on Agile teams, they are really deceivers because they are really anti-Agile or just plain negative people. They often know the decisions that are made based on certain contexts that the team is in, but will twist the truth in order to bring the project down. It is important to identify these deceivers as quickly as possible and get them off the team.


Cat – They are a lazy type on an Agile team that really do not pitch in but instead like to sleep instead. They are almost purposefully not assertive, have been used to just “getting by” on projects for years, and are not really interested in feeling ownership of the work. They typically neither positive nor negative and simply like to be left alone. The other team members will begin to notice this behavior and realize they are not really interested in becoming part of the team.


Bull – They are command-and-control types who think they can continue to tell their folks what to do even though they are dedicated to their Agile teams. Sometimes referred to as bullies, they charge right into the team and attempt to direct them to their own work and often deviate the team from building product functionality. Typically, they are not interested in the Agile mindset because they see it as a challenge to their authority (technical or managerial) or don’t really understand or care about the business benefits of Agile, but instead want to maintain their own status.

And finally no farm is complete without the Farmer.  However, on an Agile farm, it cannot be just any Farmer but instead a benevolent Farmer who is good to his animals and ensure the animals have what they need to grow and prosper.  The Agile Animal Farmer encourages, inspires, and allows for team autonomy and self organization.

I hope you enjoyed these animal farm analogies. Did you recognize any of them? What Agile animals are on your Agile farm?


Here are few more links to other Agile animal references:
Enjoy!
Posted by Mario Moreira at 6:41 AM